I recently travelled back to New Zealand for a family get together and managed wrangle a night in Wellington.

For those that are into craft beer in Australia you have certainly herd of New Zealand craft and Wellington is by far the craft beer capital of New Zealand. Garage Project, Panhead, Parrot Dog and Tuatara are all local producers but more than that, the amount of amazing venues dedicated to the craft has exploded in recent times.

My flight landed at 3:30pm and by the time I got through customs and picked up my hot pink Toyota Yaris, I was good to go. I arrived at a relatives house, did the quick hello’s and an Uber was promptly called off to the first stop, Garage Project (GP).

GP sits in Aro Valley and you have two options. The Brewery its self sits in an old service station, hence the name Garage Project, and has a small tap selection and you can see the staff working away in the brewery. On the opposite side of the street is the newly opened Garage Project Bar. This is still a small venue but the tap selection, OMG. I didn’t count how many taps there was but at a guess I would say 20, and all of them are brews from GP. There is a reason these guys are known as the willy wonkers of the beer world, they seem to take things that shouldn’t work together and turn them into these amazing creations. So I started with the Hapi Daze (Hapi being the Maori word for hops) a great pale ale made with all NZ hops (Motueka, Wai-iti, Nelson Sauvin and Riwaka). Next we ducked across to the brewery for a glass of Orange Sunshine an American style wheat beer infused with orange and lemon. check out http://www.garageproject.co.nz

Next was a walk down the hill to The Third Eye (Tuatara Brewing) named after a small third eye located on the head of the Tuatara, google Tuatara to find out what I mean. While the actual brewery is located 40 minutes north in Paraparaumu, everything is available here and they even run a small micro brewery here. There is the main bar area surrounded by big copper kettles and a beer garden out the back. My hot tip, Thursday’s is free BBQ night that includes, wait for it, beer braised onions to go with your sausage and bread and its so good you don’t need sauce. My choice here was the Nui (Maori for big) which is more of an extra hoppy pale ale, hence the name. Also available here are mash tun crackers, yep crackers made from the grain used in the brewing process, did you just say IPA crackers…. Yes, yes I did. http://www.tuatarabrewing.co.nz

Next was Little Beer Quater who just happened to have a night of sour beers, Sour as Bro. I’m the first to admit I don’t like sours, I have tried, oh how I have tried but the lack of hops just doesn’t do it for me. But being one never to shy away from a challenge I decided it would be rude not to. I went with 8 Wired Brewing’s Sour Poppy knowing that 8 Wire never disappoint, for a sour beer it was great but just not my style. The venue on the other hand was fantastic, good atmosphere and while most of the taps were sours on the night of my visit they usually have a plethera of different styles flowing through their 14 taps with another 100+ beers in the fridge. Certainly a venue for any beer geek. 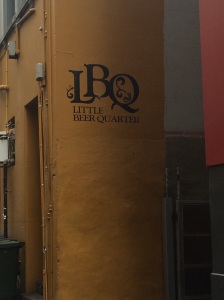 Hashigo Zake cult beer bar, after being at GP earlier and only having a couple of beers I was very happy to walk down the stairs here and see GP’s Day of the Dead available on tap, a black larger infused with cocoa and chili, willy wonka at work again. from the main bar the venue splits off to two areas, a series of tall tables and bar stools at one end and an area of seated tables at the other. Watch your head on the way down the stairs into the bar, I’m all of 5’8″ and while I didn’t have to duck if I was 6′ and few beers deep it could be a different story. http://www.hashigozake.co.nz

By now it 9pm local time but with the 3 hour difference my body was saying dinner time so it was off to Sweet Mothers Kitchen. Think New Orleans home style cooking with craft beer. Cornbread, hot wings, gumbo, seafood chowder, buttermilk fried chicken, you get the picture and now your hungry. I went with the big easy, a cheese burger, but what sold it for me was the crumbed fried pickles, wow I could have just eaten them straight they were so good. This was matched with another local favourite beer Parrot Dog’s Bitter Bitch. Don’t forget desert too with pies like pumpkin, peanutbutter or pecan and bourbon. 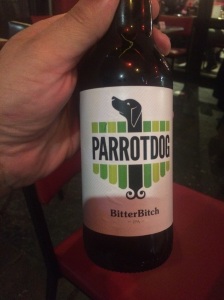 Malthouse, one of the first craft venues in Wellington and open since 1993 before there was even such a thing as craft beer. Sure there was 25 amazing beers on tap but from the fridge behind the bar, which is literally a wall of sheer awesomeness, one single can stood out, Jonny Octane, Panhead Brewery’s red IPA. I had always thought beer taste better out of a bottle and never used to drink out of a can, that is until I learned that good beer taste just as good if not better out of a can and shit beer always taste like shit beer. I think if I was only able to go to one bar it would be a fight between Garage project and here. GP because all there beers are in the one place and Malthouse because every beer you want is there.

After finishing our beers my host turns to me and says “right time for a rum” um no thanks, you can shove that idea. Its OK I’m told they have beer, well OK then. Next door to Malthouse is CGR Merchants cocktail bar. They specalise in infused gin and rum. You head up the stairs and into a small cocktail bar but there are no bottles behind the bar at all, just big jars of clear and amber liquid. They have labels on them like “cornflakes” or “lamb&mint” turns out that’s what their infused with, so yes there is lamb&mint infused gin. My advise skip all of those and go straight for the house special “salted caramel” rum. This would have been a highlight due to completely taking me by surprise. 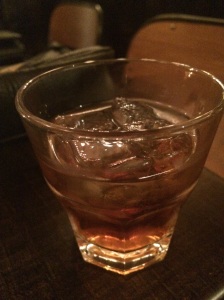 The night was then finished with coffee at one of the many late night coffee houses.

So do it, do it now get on a website, book a ticket and go. This is an amazing city that is an absolute must for any foodie or craft beer lover. There are at least another dozen specialist craft venues we didn’t make it to and the food I didn’t start to tell you how good the food is there.